You are here: Home / News / Rebuilding Your Control Valve 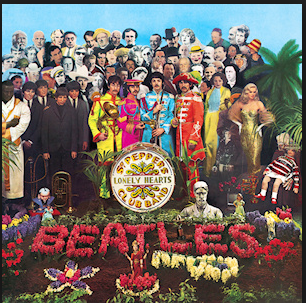 Bucket trucks are engineering marvels – electrical and hydraulic specimens.  There are working bucket trucks out there that are 45-50 years old, built back when Sgt. Pepper and Ziggy Stardust were popular.

We opted not to include the Ziggy album cover – not quite as fun as Sgt. Pepper’s.

But, back to old bucket trucks … naturally, some of the older units may need some rehab here and there.  Upper control valves that have become worn out and unresponsive may need to be replaced.  But, considering the age of some machines, is it wise to spend $3,500 for a new control?  Maybe not.

A bucket truck’s upper control assembly is conveniently located for the operator in the bucket.  Many manufacturers offer a single stick assembly (joystick) next to the bucket, as seen in the picture below. 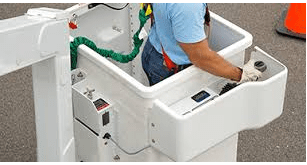 If buying new is not an option, a viable solution is to have the control valve rebuilt.  The cost is about $1,000 less than buying new.  In a valve rebuild, the seals and gaskets are replaced as well as some hardware like nuts, pins, and washers.  In addition, sometimes it is necessary to replace pistons and linkage rods – wearable parts that connect to the control head base.  These parts are essential to the control valve moving the upper boom, rotation, etc. 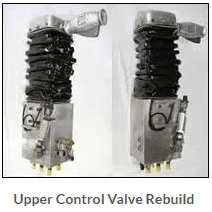 The picture below shows a 1990’s era Hi-Ranger upper control assembly with a single stick handle mechanism.  The black boot hides and protects many of the working parts of the control.

You may be asking, what about the lower controls?  Theoretically, the lower control assembly should need replaced or rebuilt just as often as the upper controls, but we don’t find that to be the case.  But if a rebuild is required, the body and spools are cleaned up in a machine shop by stripping off the old plating, then they are re-plated.

Similar to the upper control valve, the seals and gaskets are replaced as well as some hardware like nuts, pins, and washers, and any other worn parts in the lower control assembly.  The cost for the rebuild is about the same as it is for the upper controls.

We will actually answer the phone when you call.  UEP has a motto that we stand by – Prompt, Responsive Service … Guaranteed Every Day! Contact Utility Equipment Parts today regarding your Control Valve (new or rebuilt) or any bucket truck need.

The UEP Guys sat down with Robert Frost of Frost Auger Tooling, Inc.  If we did podcasts, this would have been a good one.  But alas, we thought … END_OF_DOCUMENT_TOKEN_TO_BE_REPLACED

Who can forget the muscle cars of the 60’s and 70’s?  The Pontiac GTO was the poster child.  Here’s how Ronny & the Daytonas put it: Little … END_OF_DOCUMENT_TOKEN_TO_BE_REPLACED 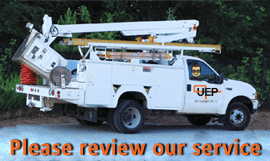 END_OF_DOCUMENT_TOKEN_TO_BE_REPLACED

Utility Equipment Parts gave us 5 Star response time.  They were very knowledgeable and I would definitely recommend them to other operators.  I can’t think of anything they could do to improve their service.

Utility Equipment Products was very prompt and worked to get items expedited even over the holidays when manufacture was closed. They were able to get items shipped directly to our needed location when no other supplier would. We would recommend UEP to other companies because their buckets were very reasonable on pricing and the customer service was tremendous. The installer even said he preferred UEP’s product to [original] manufacturers.

We were very satisfied with Utility Equipment Parts.  Tim and Terry were very knowledgeable and friendly.  They were able to answer all our questions.

Hey Tim. Thanks for the follow up call yesterday. Nice to see another small business that puts forth the effort to make sure customers are happy. My dad and brother now have your contact info as well. The parts worked and thanks for the break down pics.

We got my 2nd tree truck running 100 percent from the parts you got us and your hard work is paying off for us. We are very happy with your service.  Thank you.

I would recommend UEP  to other utility truck owners because UEP gave us great response time and were able to answer our technical questions.  They were understanding and helpful.

Absolutely the best service I’ve ever received. Will be doing my business with them from now on. Response time 5 stars, reliability 5 stars, service 5 stars. Thanks a million – Rob

END_OF_DOCUMENT_TOKEN_TO_BE_REPLACED

Great customer service! I was lost on the part numbers they walked me right through it and what I needed.  UEP even sent me a blue print of the assembly. Great job guys.

If you asked me what was the best thing about working with Utility Equipment Parts.I’d have to say it was a toss up between the personal service I received and the speed in which I received the order…I seriously got the parts before the email confirmation…less than 24 hours.  Thanks!

I was very satisfied with Utility Equipment Part’s response time and they were able to answer any technical questions I had.  Terry Rich was very helpful, even taking my call after hours on the weekend. I would recommend UEP to other utility truck owners/operators because of their service.